Leading Hornet Sports to the Top 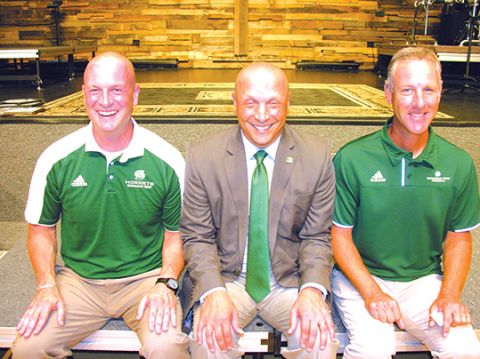 CARMICHAEL, CA (MPG) - The Carmichael Chamber of Commerce hosted Mark Orr, the new Athletics Director at California State University, Sacramento, for its luncheon on June 25. Prior to Mark’s arrival, Hornet Sports had been outsourcing its community outreach task, but now he has taken on the effort for the Department.

“It all starts with great coaches,” said Orr speaking about the state of the region’s sports panorama. “Ambitious, great, young people at their peak of performance are coming from all our local schools and playing sports at Sac State at a 60 percent rate,” he said making a case for a local ethos of sports vitality.

Like all great coaches, he exudes that positive ethos having had an energetic athletic career during his more youthful years. Born and raised in Sacramento, Orr studied and played football at Christian Brothers High School, even winning “the Holy Bowl against Jesuit High School,” he chuckled. After that he entered the College Football circuit playing at Cal Berkeley, where he graduated with a Bachelor in Social Welfare and a Master’s degree in Education.

With all the economic and social problems in young people’s lives, “I really believe college sports can make a difference,” he said. Sac State students enrolled in sports programs have an 86 percent rate of graduation, “that’s better than the student body, and our Women’s Basketball has the highest GPA in the nation,” he said.

Prior to accepting the offer at Sacramento State, Orr was the Director of Athletics and Recreational Sports in the East Bay’s Saint Mary’s College. During his time at the college, Orr was the Senior Associate Director of Athletics for Finance which added significantly to the institution’s infrastructure and Saint Mary’s success in sports in the last decade.

With Sac State’s well developed infrastructure, Orr’s task is now to bring the relevance of the university’s sports to the community. For those who can’t attend, “KOVR will televise all our Football games, and Radio 1320AM will air our games,” he said. “You’re going to see good sports; our baseball, for instance, is Number 1 beating UCLA,” he added with confidence.